A craniofacial condition (also referred to as a craniofacial anomaly, abnormality, malformation, or difference) is a deformity affecting a child’s facial structure and skull.

There are many types of craniofacial conditions. Learn a bit about some of them below.

Amniotic Band Syndrome (ABS) is a disorder present in the newborn infant in which constriction rings or bands, causing soft tissue depressions, encircle digits, extremities, or limbs and sometimes the neck, thorax, or abdomen. They may be associated with intrauterine amputations.

Read more about the symptoms and causes of ABS →

A condition of facial difference (craniosynostosis) characterized by a large skull, widely spaced eye sockets, bulging eyeballs, tilted eyelids, underdevelopment of the upper jaw, misalignment and crowding of the teeth, webbed fingers, toes or both; can also include cleft palate and mental retardation.

Read more about the symptoms and causes of Apert Syndrome →

Beckwith-Wiedemann Syndrome (BWS), a rare genetic disorder, may be characterized by a wide spectrum of symptoms and physical features that vary in range and severity from case to case. However, in many individuals with the disorder, associated symptoms and findings may include excessive size and height (gigantism); an unusually large tongue (macroglossia); enlargement of abdominal organs (visceromegaly), such as the liver and spleen (hepatosplenomegaly); protrusion of part of the intestines through a defect in the abdominal wall at the umbilicus or navel (umbilical hernia [exomphalos] or omphalocele); and/or enlargement of cells within the outer layer of the adrenal glands (adrenocortical cytomegaly).

Read more about the symptoms and causes of BWS →

One-sided facial paralysis resulting from damage to the seventh (facial) cranial nerve that may result in the inability to close the eye. Symptoms may also include pain, tearing, drooling, and auditory hypersensitivity.

Condition of facial difference characterized by an asymmetric tower-shaped skull, short neck, webbing of fingers and toes, and extra fingers. It is a very rare form of (multiple suture) craniosynostosis, and is passed on through an autosomal recessive inheritance pattern. (Charkins, 1996)

CHARGE Association is a rare disorder that results from several defects during early fetal development and affects several organ systems of the body. CHARGE is an acronym that stands for Coloboma of the eye, Heart defects, Atresia of the Choanae, Retardation of growth and development, Genital and Urinary anomalies, and Ear anomalies.

Read more about the symptoms and causes of CHARGE Syndrome →

Cleft lip alone, cleft lip with cleft palate, or cleft palate alone, are the most commonly occurring congenital facial anomalies. Clefts result from an incomplete fusion of skin, muscle, or bone during early fetal development (between the fifth and twelfth week of pregnancy). Cleft lip and cleft palate can occur separately or together as a child’s only facial difference, or can occur together with other characteristics of a syndrome or other congenital condition.

Premature closing of the seams (sutures) between the bones of the skull…causing distortion and underdevelopment of parts of the skull and often the face (usually midface). Conditions resulting from this are separated into two major categories:

Condition of facial difference (craniosynostosis) characterized by an underdevelopment of the bones in the middle third of the face and skull; a high, flat, prominent forehead and increased head width, bulging of the eyes, strabismus, receded upper jaw, high and narrow palate. The gene for Crouzon Syndrome has been mapped to chromosome 10. It is called Fibroblast Growth Factor Receptor 2 (FGFR2), and is the same gene responsible for Apert and Pfeiffer Syndromes. (Charkins, 1996)

A genetic condition of facial difference characterized by microstomia (small mouth), flat mid-face, webbing of the neck, contractures of the hands and fingers, and club feet. Also called “whistling face syndrome.” The condition can run in families or occur spontaneously. (Charkins, 1996)

A usually harmless tumor made up of blood vessels that can occur as a birthmark or develop later in life. Can be flat or raised: found anywhere in the body, but usually in the skin. Types include: “strawberry” or “raspberry” marks, port wine stains, cavernous. (Charkins, 1996)

An extremely rare condition of facial difference characterized by downslanting eyes; cleft palate; recessed lower jaw; small cup-shaped ears; a broad nasal ridge; limb anomalies that may include shortened and bowed forearms, underdevelopment of the cheekbones and forearm (radius and ulna); missing or webbed fingers and toes, and abnormal growth of the lower leg (tibia and fibula).

A condition of facial difference characterized by paralysis of the seventh (sometimes sixth) cranial nerve(s), microtia, and sometimes chest and limb anomalies (extra or webbed fingers or toes), cleft palate, hearing impairment, and a small mouth and jaw. (Charkins, 1996)

A condition of facial difference (with great variability of expression) commonly characterized by flat cheeks and downslanting eyes, almost total absence of the eyelashes, low-set cupped ears, very small lower jaw, asymmetric underdevelopment (or absence) of the thumbs (Charkins, 1996) and the radial limbs. May also include clefting of the hard or soft palate.

A pigmented or nonpigmented spot on the skin; may be flat or raised, hairy, smooth, or warty. Some types include: nevus flammeus (port wine stain—a flat, purple-red mark, usually on face or neck); nevus vasculosus (strawberry mark—a bright red, raised mark that increases in size); systematized nevus (a widespread congenital nevus that follows a pattern). (Charkins, 1996)

Also known as Progressive Facial Hemiatrophy (PFH) and Progressive Hemifacial Atrophy (PHA), Parry-Romberg Syndrome involves a slow, progressive wasting of the soft tissues of half of the face, usually affecting the eyes and hair. May also involve neurological abnormalities such as seizures and trigeminal neuralgia. The range and severity of symptoms vary greatly.

A condition of facial difference (multiple suture craniosynostosis) characterized by a tall head that is flat in the front, bulging of the eyes, a receded midface, high arched palate, crowded teeth, broad thumbs, and big toes, and usually normal intelligence. Often confused with Crouzon syndrome, Pfeiffer Syndrome—which is also an autosomal dominant syndrome—may result from a genetic mutation on either chromosome 8 (FGFR1) or chromosome 10 (FGFR2). (Charkins, 1996)

A condition of facial difference characterized by severe underdevelopment of the lower jaw, a backward-positioned tongue, and usually a cleft palate. If other problems are noted, the child has a syndrome. The two conditions that most commonly cause Pierre Robin sequence are Stickler and velocardiofacial (Shprintzen) syndromes. (Charkins, 1996)

Skull asymmetry (“twisted”) characterized by a flattening of various surfaces of the skull, not caused by premature fusion of skull sutures (which is known as “synostotic plagiocephaly”). With Positional Plagiocephaly, skull x-rays will show open sutures. Possible causes include Torticollis, premature birth, intrauterine pressure, or sleeping position.

A condition of facial difference (multiple suture craniosynostosis) characterized by asymmetric head and face, low-set hairline with turned up hair follicles, droopy eyelids (ptosis), low-set ears, beaklike nose, deviated septum, short fingers with some possible fusing. The features are not very obvious, and may be confused with either Crouzon, or Pfeiffer syndrome or with unilateral coronal synostosis. Saethre-Chotzen Syndrome is distinct, however, because the site of the altered gene lies on chromosome 7. (Charkins, 1996)

A condition of facial difference is characterized by skeletal abnormalities, arthritis, and eye problems, in addition to features of Pierre Robin sequence. (Charkins, 1996)

A congenital condition characterized by a port wine stain, usually on one side of the face, and a hemangioma on the brain. May also include seizures, glaucoma, developmental delays, and enlarging of the eye on the side of the port wine stain. (Charkins, 1996)

A condition of facial difference characterized by bilateral and symmetric underdevelopment of the bones and soft tissue of the head and face. Common features include:downward slanting eyes, notching of the lower eyelids (colomboma), sparse or absent eyelashes in the inner one-third of the lower eyelids, underdevelopment of the cheekbones, lower jaw and upper jaw, bite problems, small face, underdeveloped and/or unusually formed outer ears, and hearing loss. (Charkins, 1996)

For nearly 70 years, myFace has worked with patients and families to provide comprehensive care and support. In addition to providing access to state-of-the-art medical care, myFace provides other important services such as emotional support groups, workshops and educational webinars that offer guidance, counsel and resources for patients, families and the greater craniofacial community across the country. 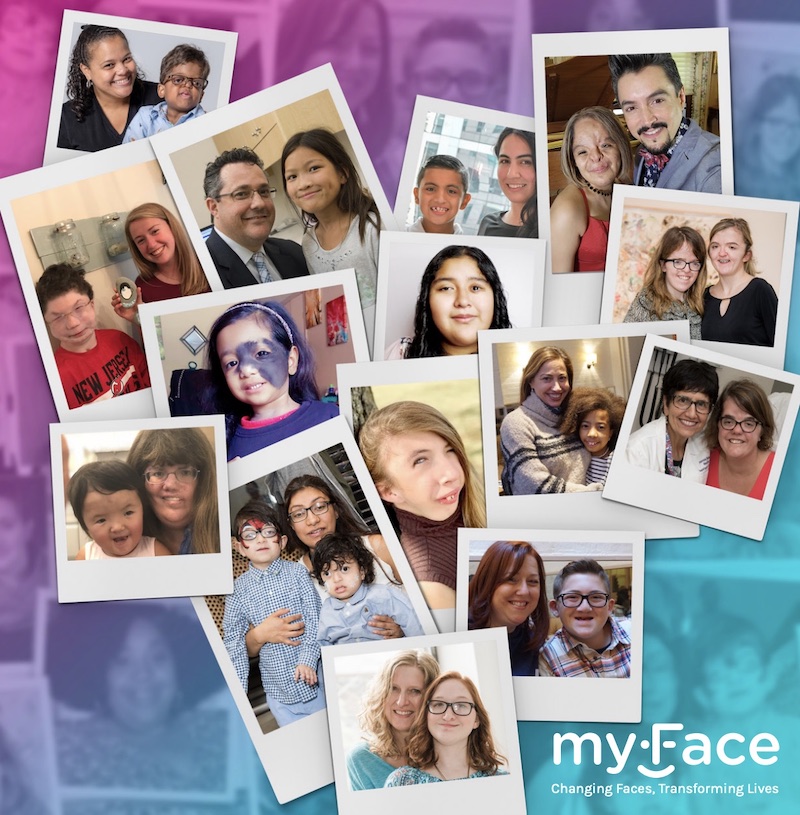 Get updates from myFace!

Join the myFace Community today for updates on our craniofacial programs and resources, like our myFace, myStory podcast and Transforming Lives educational webinars.