Lily is a very talented, passionate and determined young woman. She doesn’t just reach for the moon, but for the stars and galaxies beyond! However, since she’s also quite modest, we felt we needed to showcase just who this special high school senior is.

Lily was born with a unilateral cleft lip and received her surgical repair at 4 months old. She and her family have been an integral and active part of the myFace family ever since. 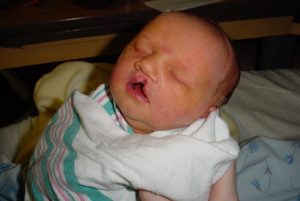 “myFace has provided me an incredible opportunity to get involved, make a positive impact, and give back to the craniofacial community that is so near and dear to my heart.”

Lily’s has had her own Races for Faces team, Lily’s Smile, since myFace launched this event almost 10 years ago. And for last year’s virtual event, she won the Most Spirited Individual Award and even surpassed her fundraising goal of $1,800!

In 2020, she also participated in the myFace Talent Show at Merkin Concert Hall in NYC. Lily is an accomplished violinist and was honored to be able to share the stage with so many other talented myFace Stars whom she’s gotten to know over the years.

Following her passion for music, this fall Lily will be attending Ithaca College to pursue a degree in Music Education! She was awarded a leadership scholarship and, as part of the yearly requirements, she will continue her work with myFace to educate her peers about craniofacial differences, and build an even bigger and better team for Races for Faces this coming September. Go Lily!

My Brother, Kyle: A Sibling Perspective