Ezra Kahn is not just any typical 15-year-old. He has a unique sense of empathy, patience and compassion for a young man his age. He also plays the cello, sings, and dances, and is a star gymnast to boot.

His experience growing up with Pierre Robin Sequence has helped him develop a special consciousness and inner strength that allows him to rise above. The community of support from myFace has provided him and his family with the guidance and friendship they’ve needed to overcome many challenges.

“myFace has helped me help others that were not as fortunate as me and to create bonds with people who have faced challenges as I have.”

As a baby, Ezra spent much of his time with his parents in and out of the NICU. Having a small jaw and airway made it very difficult for him to eat and breathe. Kids would often make fun of Ezra because of his small mouth and teeth. However, he found that by taking the time to explain to his peers why he looked the way he did, he disarmed them and they treated him more positively.

Ezra has taken this same discipline with him in approaching gymnastics. He started at age 4 and practices 5 days a week for 3 ½ hours per day. He gripes that it’s sometimes difficult because the practices are long and physically challenging, but recognizes that “you have to push through” in order to be good. At “Level 9,” he’s now a force to be reckoned with in the All-Around, Pommel Horse, Rings and Parallel Bars.

“Keep your head up. The challenges you face make you stronger on the inside.” 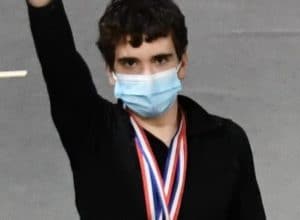 myFace, myStory: A Q&A with Rasheera Dopson – Author of Beauty With a Twist